How to House: How to Make a Bed Like a Hotel | HGTV

Learn how to replicate a perfectly made hotel bed at home with high-count bed sheets, comfy duvet and lots of pillows.
Come see us to make your perfect and cozy bed.
Phone: (530) 756 – 4187
Email: info@davishometrends.com
Address: 2300 Fifth Street, Davis, CA 95618
Website
Posted by Davis Home Trends at 5:00 AM No comments: 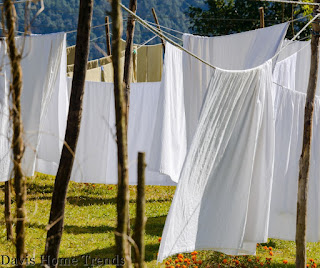 Bedding, also known as bedclothes or bed linen, is the materials laid above the mattress of a bed for hygiene, warmth, protection of the mattress, and decorative effect. Bedding is the removable and washable portion of a human sleeping environment. Multiple sets of bedding for each bed are often washed in rotation and/or changed seasonally to improve sleep comfort at varying room temperatures. Most standardized measurements for bedding are rectangular, but there are also some square-shaped sizes, which allows the user to put on bedding without having to consider its lengthwise orientation (e.g. a 220 cm × 220 cm (87 in × 87 in) duvet).

In American English, the word bedding generally does not include the mattress, bed frame, or bed base (such as box-spring), while in British English it does. In Australian and New Zealand English, bedding is often called manchester, especially in shops. Manchester was a center of the cotton industry in the late 18th and the 19th century, and into the 20th century, and so cotton goods (principally sheets and towels) were given the name 'Manchester goods', which later was simplified to 'manchester'.

A set of bedding generally consists of at least flat or fitted bed sheet that covers the mattress; a flat top sheet; either a blanket, a quilt, or a duvet. Sometimes with a duvet cover is to be used in addition to or instead of – the top sheet; and a number of pillows with pillowcases, also referred to as pillow shams. (See § Terminology for more info on all these terms.) Additional blankets, etc. may be added to ensure the necessary insulation in cold sleeping areas. A common practice for children and some adults is to decorate a bed with plush stuffed animals, dolls, and other soft toys. These are not included under the designation of bedding, although they may provide additional warmth to the sleeper. 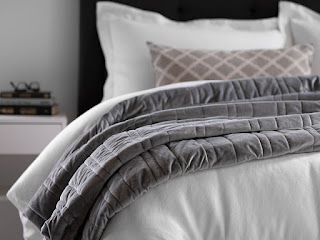 Luxury customizable bedding personalized to your taste. Whether you are looking for modern glam bedding or rustic charm, we have a bedding set for you.

Learn about all of the operating systems available for Vignette® Modern Roman Shades.
Beautifully designed front and back without gathers, cords or grommets, Vignette® Modern Roman Shades from Hunter Douglas are distinctively elegant.
Visit us today to get the perfect shades for your home.
Phone: (530) 756 – 4187
Email: info@davishometrends.com
Address: 2300 Fifth Street, Davis, CA 95618
Website
Posted by Davis Home Trends at 4:53 AM No comments:

What are Roman Shades? 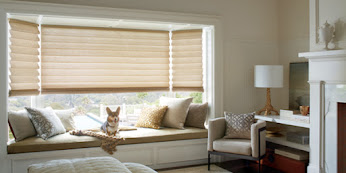 Roman shades are a type of window blind used to help block out the sun. Although often called blinds, these are actually referred to as "shades" in the window covering industry. They are often referred to as Romans or Roman blinds in the UK. When opened, the Romans stack up evenly; when covering the full window height, they are smooth without overlapping.

Roman blinds can be purchased with a blackout lining on the back to fully block out sunlight. However, there will always be small light gaps on the edges of the blinds if mounted on the inside of the window frame or peaking out from behind the blind if mounted on the frame around the window.

Unlike other blinds, such as certain fabrics used for Roller Shades, Vinyl Vertical blinds, or Vinyl Horizontal blinds, Roman Shades are not an ideal option for areas with a lot of moisture, such as bathrooms or windows above the kitchen sink. 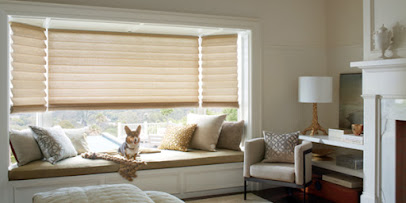 Part of our Roman Shades line, the Vignette Roman Shades feature exquisite woven fabrics, sourced from across the globe, and are engineered to provide years of reliable beauty in every window they adorn. Luxurious sheer, light-filtering, and room-darkening fabrics maintain uniform, soft full folds or crisp flat folds with the added benefit of no exposed cords on the back of any vignette shade.

Learn more about Palm Beach™ polysatin shutters.
Constructed from a UV resistant polysatin compound, and the exclusive DuraLux™ Finish, Palm Beach polysatin shutters are guaranteed never to warp, crack, fade, chip, peel or discolor, regardless of extreme heat or moist conditions. Offered in a range of popular whites, they are designed for the ultimate in durability and easy care.
Visit us today to get the perfect shades for your home.
Phone: (530) 756 – 4187
Email: info@davishometrends.com
Address: 2300 Fifth Street, Davis, CA 95618
Website
Posted by Davis Home Trends at 4:48 AM No comments:

What is a Window Shutter? 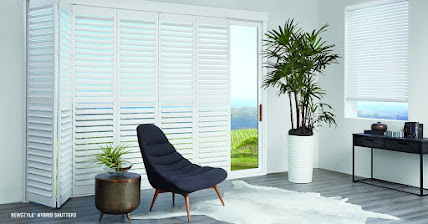 A window shutter is a solid and stable window covering usually consisting of a frame of vertical stiles and horizontal rails (top, centre and bottom). Set within this frame can be louvers (both operable or fixed, horizontal or vertical), solid panels, fabric, glass and almost any other item that can be mounted within a frame. Shutters may be employed for a variety of reasons, including controlling the amount of sunlight that enters a room, to provide privacy, security, to protect against weather or unwanted intrusion or damage and to enhance the aesthetics of a building.

Depending on the application, and the construction of the window frame, shutters can be mounted to fit within the opening or to overlap the opening. The term window shutter includes both interior shutters, used on the inside of a house or building, and exterior shutters, used on the outside of a structure. On some styles of buildings it is common to have shutters to cover the doors as well as the windows.

Posted by Davis Home Trends at 6:30 AM No comments: 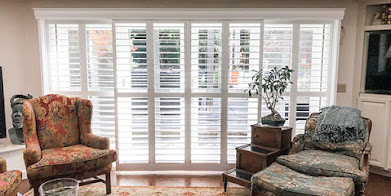 For windows exposed to sunlight and moisture, the Palm Beach shutters are perfect for your home. Fashioned from a technologically advanced Polysatin™ compound, they will maintain their beautiful luster without warping, cracking, fading, chipping, peeling or discoloring, even under harsh environmental conditions.

Visit us today to get the perfect shades for your home.